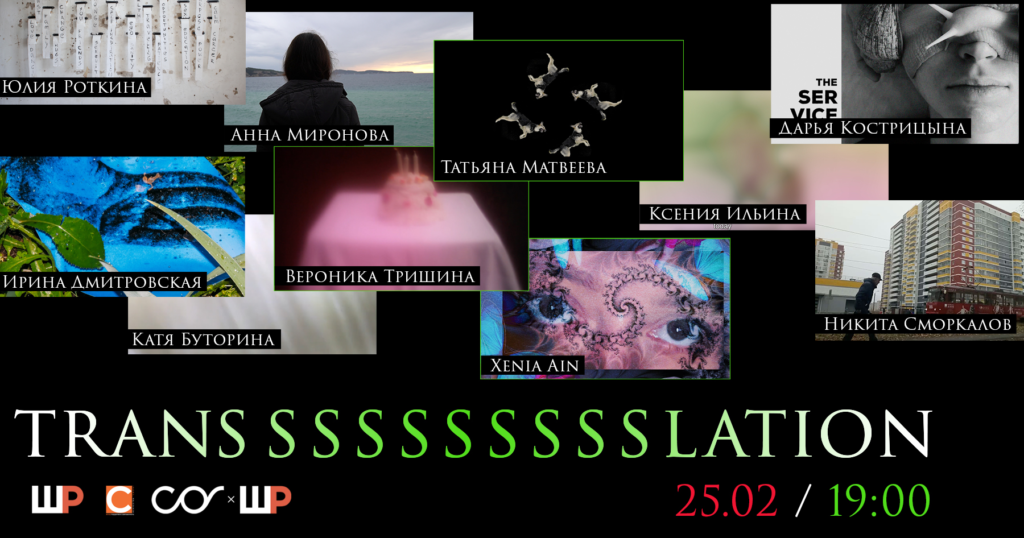 On 25 February there was the opening of the exhibition “transssssssssslation” of Ulyana Podkorytova’s group Drift based on the outcome of her workshop at the Rodchenko Art School online.

Participants of the exhibition: Katya Butorina, Irina Dmitrovskaya, Kseniya Ilyina, Darya Kostritsyna, Tatyana Matveyeva, Anna Mironova, Yulia Rotkina, Nikita Smorkalov, Veronika Trishina, Xenia Ain.
The works are presented on the second and first floors. The following films are screened in the screening room:
(No)dreams in the era of quarantine
Anna Mironova
12’08’’
Documentary
2020
The film (No)dreams in the era of quarantine comprises several stories from the dreams, fantasies, and real memories of doctors and nurses, who became the principal characters of the events of the 2020 pandemic. Finding themselves in the new “COVID” reality, they preserve the immediate and sincere perception of life, they feel its happiness and inspiration.
Anna Mironova @miramirar is a director, video artist, and researcher. She lives and works in Moscow. She studied filmmaking at the Arch Film School (2018), and video art at the Moscow School of New Cinema (2019) and the Rodchenko Art School (2022). Anna holds a PhD in Sociology. She works with documentary material as a means of exploring relations between the man and the world, relations with others and with oneself.
‘AS 1’
Kseniya Ilyina
single channel video, 2’30”
There’s one question that bonds us together: what are we?
What do we consist of? Of which parts?
Single thoughts merged into the mindflow of one person, they endlessly chase their own self that is in fact non-existent.
Kseniya Ilyina is an artist, she lives and works in St. Petersburg. She works with video, photography, graphics, and objects. She graduated from the Saint Petersburg Stieglitz State Academy of Art and Design.

Envil
65 min. Experimental documentary film, biopic, 2021.
An experimental documentary film about the contemporary artist from Udmurtia Envil Kasimov, who has become an influential politician in the republic. Kasimov’s Udmurtia is the motherland of the greatest people on the planet: Kazimir Malevich, Yuri Gagarin, Steve Jobs, Albert Einstein, and many others. In the late 1980s Kasimov was one of the organizers of the first exhibition of contemporary art in Udmurtia, introducing it not only to the people of Izhevsk, but also to the government of the republic. In the 1990s he became a businessman and public figure, and, as a result of his public work, he started working in the government – between 1999 and 2020 he was a member of the republican State Council. Using the opportunities which had opened up for him, he created the art, narrating to us the myth about Udmurtia.
There is also a film by Nikita Smorkalov, a video artist and documentary filmmaker. Nikita lives in the city of Izhevsk, he has graduated from the Faculty of History of the Udmurt State University (the Department of Ethnology and Regional Studies). He is a student of the Rodchenko Art School online, the video art workshop of Ulyana Podkorytova. The main directions of his work are video art and documentary film, visual anthropology. He is interested in the history of Izhevsk, the mythology of space.

The exhibition takes place with the support of SPHERE Contemporary Art Foundation.