Alina Glazoun (born in 1988) lives and works in Moscow. She graduated from the Department of Arts of Lomonosov Moscow... END_OF_DOCUMENT_TOKEN_TO_BE_REPLACED 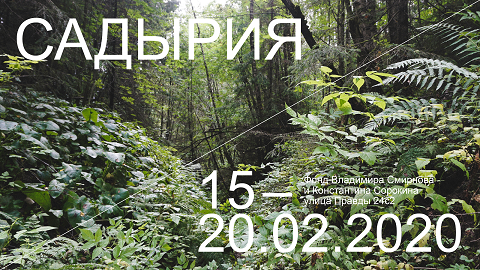 The city was founded on wasteland by the heavy hand of industrialization. In order for it to take root and flourish, the project of “the garden city” was established – a small detail of the great plan of transforming the nature. The kilotons of dug-out salt, the smoke, emitted by industry, and the sizzling azure slime were expected to be processed by the extra forces of the green proletarians. Lime trees, birches, poplars, hawthorns, phloxes, Rosa rugosa created the dendrological paintings of the plan of landscape gardening. The young naturalists and workers, deeply in love with greenery, moved the plants to the City in order to create benevolent soil so that the Soviet man could flourish.

Decades later, the great plan, as well as its small detail, ended in failure — a bunch of sinkholes at the very heart of the Garden City. Seizing municipal buildings and apartment houses, they swallowed the areas of the green city exhausted by industry. The gaping earth interrupted the long history of folding, which had been carefully putting one era upon another and synchronizing the times. It mixed all the periods on the Earth, pulled the deep time to the surface, and brought the human time away to the outskirts and under the ground. The new vegetation, often exuberant and invasive, infiltrated this abandoned portal of eras. Growing on the edges of the sinkholes, it built its own plan which hid beyond the high fences, marking the perimeter of the territory in the state of emergency.

What can we see here? What is there, at the bottom of the sinkhole? Just a hole? Just water?

Using various materials — the lines of surface-piercing vegetation, the buzz of water which has filled the gaping hollows, the detrita and echo from abandoned buildings – the participants of the expedition to the City created a system of signs, reconstructing the plan of transformation by the nature. It does not have a project designer and “the author of vegetation”, it is being composed of a large number of draft fragments from different times and spaces which happened to get together on the spirals of the caves.

SADYRIA — the project of Posthuman Studies Lab in the framework of the platform Russian Ferations, the purpose of which is to explore post-Soviet territories, their wild/ feral ecologies and cosmologies.